I’m a music critic for  the renown Swedish newspaper Svenska Dagbladet (svd.se) and a freelance journalist, writing about culture in general and focusing on the global development of music.

Directed the documentary film Fonko, produced by Story, about contemporary African music. Has so been shown at festivals and cinemas in about 30 countries.

Has made a number of music documentaries for Public Swedish Radio P2. 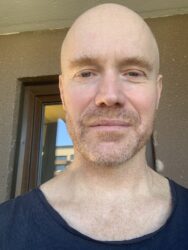